So if you think are a beginner and wanna improve on your gameplay, then it is a perfect post for you. In this article, you will get some important tips and tricks if you are a beginner.

Landing In a Safe & Better Spot

Landing in a better place is really important. You can’t drop in a place where finding necessary things would be very tough. If a player fixes his mind on where he wants to drop, it saves a lot of time and gives a clear mindset to the game. Depending on the playing style and depending on the decision of majorities, jump in a place where the game will become easy.

You can either drop into a crowded space where you can get so much loot. Or you can choose a space where the crowd is a little less as well as loot too. Hot dropping areas have some risk, but you and your teammate can have valuable suppli if you can survive.

That’s not right. Choosing characters does matter on gameplay. It is a thing that pro players do not neglect. Here in the following, I’m giving some examples of the skill set of different types of characters in Free Fire: 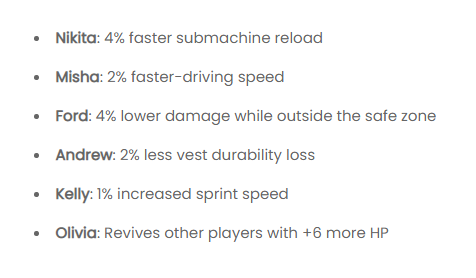 Don’t Spend Too Much Time in Loot.

That’s a common mistake that a beginner makes. You do not need to spend so much time looting. At the same time, others are busy finding a better place to camp and attack enemies. It would help if you were not so obsessed with your supplies. Take things that matter to you, and then stop looking for new loots. And also, you have to be very careful while looting in empty spaces.

If you are playing as a team, always keep a backup while looting. You can also use a smoke grenade while looting somewhere. It will save you from the unexpected fire from the enemy. And do not just waste your time on looting while you actually do not need anything.

Do not Stand Still During a Fight.

So now it would be hard for the enemy to fire you with full range. The enemy will keep missing his fires. At the same time, you will keep firing at the enemy and try to read his mind so he cannot move, or if he does, you can guess those areas.

You can not master the game by just reading articles online or watching videos on youtube. You have to play it and win it there. Implementing an idea on the game is hard. And to make it easy, you have to keep practicing everything you have learned from this post. Keep spending time on Practice mode, so you become more and more experienced. And also, try to implement it on the game mode.

That is it for today. These were some simple tips and tricks for beginners in Free Fire. If you think you are a beginner and follow these steps and implement themes in real gameplay.

Can You Play Free Fire On Your 1.5 GB RAM Mobile? Free Fire Installation

Can You Play Free Fire On Your 1.5 GB RAM Mobile? Free Fire Installation